The woman who keeps growing

The woman who keeps growing

Standing at 6ft 6ins and weighing 34 stone, Tanya Angus has been dubbed a modern day giant - and she is still growing. 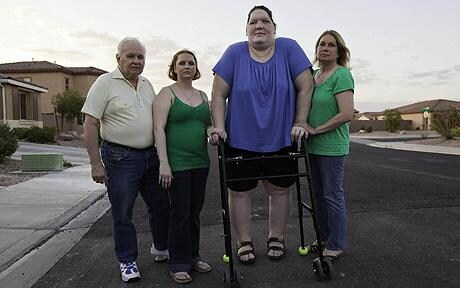 Tanya Angus: Now doctors say Miss Angus, 30, from Nevada,is the only woman in the world whose growth cannot be halted by medication. Photo: BARCROFT 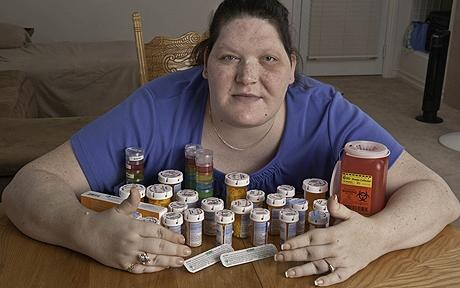 Tanya Angus: Now doctors say Miss Angus, 30, from Nevada,is the only woman in the world whose growth cannot be halted by medication Photo: BARCROFT

She has gained ten inches in just 12 years as a result of a rare growth condition, and is already one of the tallest and heaviest women on the planet.

Now doctors say Miss Angus, 30, from Nevada,i s the only woman in the world whose growth cannot be halted by medication.

Suffering from a rare disease known as Acromeglia, a condition often referred to as "gigantism" where the body produces too much growth hormone, Miss Angus grew from a slender 5ft 8ins at the age of 18 to 6ft 6ins and 34 stone.

"Without hope you don't have anything. I hope they can stop me growing one day so I can try to live as normally as possible."

Miss Angus's troubles began in her late teens when she noticed that her feet, face and figure were continuing to grow at an alarming rate.

"I started to feel unhappy with my appearance. I started spending a fortune on make-up, trying to make myself look better. I couldn't understand why my face didn't look as attractive any more," she said.

She also began suffering severe migraines and felt run down and depressed, as if she was suffering from constant flu.

But though she kept going to see her GP, he believed the 20-year-old was just an attention-seeker hoping to be given anti-depressant drugs, and refused to help.

Even more shockingly Miss Angus's figure started to alter, and her once womanly body became larger overall, and straight up and down like a man's body.

"Someone at work actually asked me if I used to be a man," she said.

"My voice had also changed and become deeper. I was devastated and started to feel very shy and insecure." Things finally came to a head when her own boyfriend also asked her about her new shape, and got his mum to ask her whether she'd had a sex change. "I was heartbroken and I decided I didn't want any more to do with him," she said. "I phoned my mum and said I wanted to come back to Nevada.

"As soon as my sister saw me at the airport, she knew I'd changed, and she called my mum and told her we needed to see a doctor."

The family GP immediately recognised the signs of gigantism and referred Miss Angus to a specialist. At that stage she was 6ft 1ins tall, and a size 14 to 16, with a size 10 feet.

An MRI scan eventually showed a tumour the size of a grapefruit in her brain which had wrapped itself around her inner carotid artery, causing an overproduction of growth hormone. It was so big, doctors at first said there was nothing to be done. But Miss Angus's mother, Karen, searched the Internet and medical publications until she finally found a doctor who said he could operate.

In 2003, she finally underwent surgery to remove most of the tumour, although small parts of it were too difficult to separate from her brain. She was then given a tail of drugs to try to control the huge amounts of growth hormones still in her body.

Doctors were anxious to bring the level down to less than 1,000, but they were barely able to do that. Her height had crept up to 6ft 3ins, and she was now a size 20.

Unable to walk properly, she had to live with her mum and stepdad. She barely went out and was subjected to stares and rude comments in the street.

"It was horrible," she said. "My whole life had to change, and I couldn't do anything for myself any more. The hardest thing is that people kept thinking I was man, and calling me sir, which really annoys me. I try to dress in feminine clothes and wear make-up to look nice, but it's really hard when you're my size." Two years later in 2005, the hormone levels again began to soar, and Tanya's mum sought out a second specialist who discovered the tumour had grown again and was now the size of an orange.

She underwent further surgery, and fat from her stomach had to be used to pad out areas of brain tissue from where the tumour had been removed.

Tanya was put on another set of medication to reduce the growth hormone, but her levels have never sunk to below 900 and are now way over 1,000. She is now one of the world's tallest women, and also one of the heaviest.

Then two years ago, Miss Angus also suffered a stroke, caused by the pressure her massive body was putting on her heart.

She had to learn how to walk and talk again, and now suffers hearing difficulties. She recovered and went to live with her sister, but still struggles to get around, and now uses a wheelchair.

"Doctors just say there is nothing we can do for her," said Karen.

"You don't know how many doctors we have called to try and help us. We've spent all our savings, over $200,000 trying to help her.

"One doctor even told me that my daughter had only two months to live. "That was eight months ago, but I refused to believe it. I won't stop until we can find something to halt the growth."

Now Tanya has a new doctor, who she's been seeing for three months, and he is hopeful of finally finding a drug combination to slow down her growth.

"I'm doing this story because I want people to understand why I'm this way," she says.

"It's not my fault I ended up like this.

"People even in my home town are still so hurtful, and I'd like people to be educated so they can treat me as a real person at last." 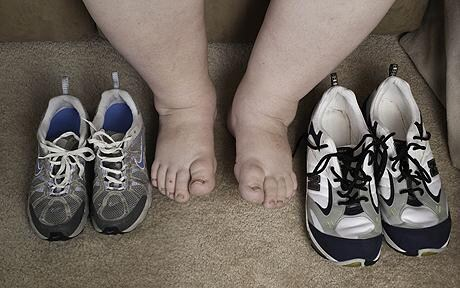 Tanya Angus: Now doctors say Miss Angus, 30, from Nevada, is the only woman in the world whose growth cannot be halted by medication Photo: BARCROFT
posted by truesee  # 9:48 AM
Comments:
she has indian blood in her,something in that causes the growth that she has... my family has the gene and in my hometown of socorro new mexico there are remains of humans over 10 ft tall.it has something to do with the paliedian blood line. i am 7'01" normal and healthy...
www.stevenquayle.com