Authorities today sharply increased the estimate of the number of bodies disinterred at Burr Oak Cemetery in southwest suburban Alsip in a scheme to illegally resell grave sites.

Two hundred to 300 bodies were dug up and dumped into an isolated, weedy area of the cemetery, Assistant State's Atty. John Mahoney said at a bond hearing for four cemetery employees charged in the scheme.

Former cemetery manager Carolyn Towns, 49,  foreman Keith Nicks, 45, and dump-truck operator Terrence Nicks, 39, all of Chicago, and back-hoe operator Maurice Dailey, 59, of Robbins, were each charged with one count of dismembering a human body, a Class X felony.

Bail for Towns, who was described as the scheme's mastermind, was set at $250,000, and for the other defendants at $200,000 by Cook County Judge Maria Kuriakos Ciesil.

An arrest warrant was also issued Tuesday for a fifth person, a 45-year-old woman who was a secretary at the cemetery, according to Sheriff's Department spokeswoman Brittney Blair.   But the woman was not charged after investigators became convinced that she did not profit from the scheme and was only carrying out orders from Towns, who was the office manager.

"Carolyn Towns was the brains behind the operation, the one calling the shots," Blair said.

The defendants were able to successfully carry out the scheme, prosecutors said, because bereaved relatives often came into the cemetery office to buy grave sites with cash. Towns would take the cash and destroy the deeds and other paperwork for the existing graves, they said. Towns would keep the cash and pay off the other defendants by increasing their overtime pay, which she controlled as cemetery general manager.

Mahoney described the defendants's actions as "cold, calculating and showed a total disregard for human souls."

Detectives discovered a pile of  bones decomposed, above ground and uncovered in an overgrown, fenced-off portion of the cemetery, according to Cook County Sheriff Tom Dart.

In addition, bodies apparently were double-buried in already existing plots, Dart told WGN-AM 720 this morning. Dozens of FBI agents are expected in Chicago early next week to help sift through the evidence at the cemetery, Dart said.

The charges against Towns allege that "numerous graves were excavated and the human remains were then buried in a rear vacant lot in Burr Oak cemetery, Alsip ... She then sold the vacant gravesites for her own personal financial gain." Authorities said she earlier had been fired by the cemetery's owners because of theft allegations.

One of the first predominantly African-American cemeteries in the area, Burr Oak is the resting place of many historic figures, including civil rights symbol Emmett Till, blues legend Dinah Washington and heavyweight boxing champion Ezzard Charles.

Dart said he was certain Till's remains were not disturbed, but he could not be sure about the others.

This morning, a large crowd converged on the cemetery, most of them African-American, saying they wanted to find out if their loved ones' remains had been moved.  The families expressed outrage, disgust and discouragement.

Dart said this morning that none of the cemetery's workers came to work today, so the sheriff's office was aiding residents walk through the plots.

"This is just heartbreaking.  The people I have talked to have made me want to cry," Dart said. "The sense of violation is horrible."

"Some people come back from the grave site and it's not what it's supposed to be and I don't know what to tell them," he said.

Sheriff's employees are having concerned families first take a number. When their number comes up, they are taken to the site. But the wait is long so Dart's office has brought out chairs for the elderly as well as water, drinks and chips for relatives.

Some people who know where the location of their loved ones' graves are just heading to them on their own.

Dart said he believes the alleged scheme has been going on for about four years.

"We have evidence...There were also people being double-buried, that they would just sort of pound down the one casket or remains and put another set of remains on top," he told WGN-AM.

The disinterred graves appeared to be older, neglected ones, Dart said. "They specifically looked to older graves, where there might not be someone coming out there every week," he said.

Dart said it would take weeks, if not months, before it will be known who the bodies are.  Between 30 and 40 FBI agents "from all over the world" who specialize in identifying remains will arrive on Monday to work on the case, he told WGN-AM. It will take four or five weeks to sift through the area in the cemetery in which the bodies were dumped and which has been fenced off as the main crime scene, Dart said.

No remains have been removed yet, Dart said. The bones were scattered above ground, along with casket and other related debris, over an area of about four blocks in a hilly portion of the cemetery. There's a lot of overgrown vegetation there, he said, and the area stretches from Kostner to Cicero Avenues.

The FBI is conducting tests to determine the identities, but Dart said he was not familiar with their methods. He said it was possible not all bodies would be identified. Compounding the problem, many cemetery records appear to have been destroyed.

Simeon Wright of the La Grange area, a cousin of Till, said: "This is reprehensible if it's true. I've got several generations of my family buried there, and I've never had any problems. ... But this is a pretty ghoulish story."

On Wednesday night, as news of the grim discovery spread, devastated families started trickling onto the cemetery grounds to check on their loved ones' graves.

Donetta Newman, 35, whose father and both of her grandparents are buried at Burr Oak, stood in the rain trying to get inside to see if their grave sites had been disturbed. "You always think this is the final resting place," she said. "This is just shocking. I'm very distraught."

None of the remains had been removed from the site, said Steve Patterson, a sheriff's spokesman. The state's attorney's office and  FBI are also investigating, Dart said.
In recent years the cemetery at 4400 W. 127th St. has drawn complaints for overgrown grass, sunken grave sites and  flooding.

Police told industry experts, consulted as they investigated the case, that the conspirators probably took in around $300,000.

Sheriff's police learned of the grave-reselling scheme six weeks ago when they were contacted by the Arizona-based cemetery owners, Perpetua Inc., who told police they were concerned about possible financial wrongdoing, Dart said. The scheme came to light after another cemetery employee told the owners of the re-sold deeds and the owners contacted the sheriff's police department, Blair said.

Perpetua Holdings of Illinois, Inc. has owned the cemetery since 2001. Trudi McCollum Foushee, a Missouri-based attorney for company president Melvin Bryant of Richardson, Texas, would only confirm the company went to police, triggering the investigation.

Authorities alleged that Towns and the other suspects targeted graves they knew had not been visited in a long time and then Towns fraudulently altered the deeds to the plots, sheriff's spokeswoman Blair said. The plots were then resold to unsuspecting families seeking a grave site for a loved one.

All targeted grave sites were very old, though some still had headstones, Blair said. The caskets, vaults and bodies were dumped in a large back portion of the cemetery, where investigators found human remains lying in plain sight amid piles of dirt, she said.

Once a plot was resold, Blair said, "They would dig up the body, toss it and by the time the (newly) deceased person got there, they were put in the grave and their family was none the wiser."

When investigators went out to the cemetery, Dart said, "We originally thought it was just a pure financial crime that we were walking into and then ... within minutes of being out here, we had a pretty good handle on what we were dealing with, and it went well beyond anyone's idea of a financial crime"

Blair said that financial crimes charges could be added later, but it was unclear how much money was netted from the scam. Authorities are still trying to piece together the scheme with what few records exist.

"Unfortunately, they destroyed so much paperwork," Blair said. "I think that [the secretary] was tasked with destroying documents relating to the sale and resale of the deeds."

The Tribune is not naming the secretary because she has not been charged with a crime.

CHICAGO, Illinois (CNN) -- Employees at a historic African-American cemetery near Chicago allegedly dug up more than 100 graves as part of an off-the-books scheme to resell burial plots to unsuspecting customers, authorities said Wednesday. 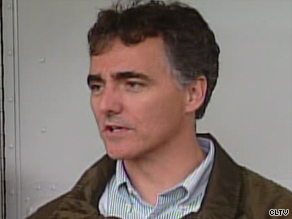 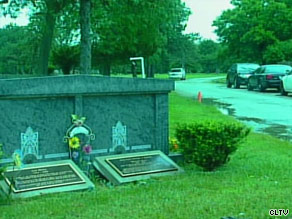 Dozens of graves at Burr Oak Cemetery were desecrated by workers as part of a financial scheme, authorities say.

Cook County authorities began investigating the cemetery about six weeks ago after receiving a call from the owners of Burr Oak Cemetery in Alsip, Illinois, located about 20 miles south of Chicago.

The owners had concerns about possible "illegalities going on" regarding finances at the business, said Sheriff Tom Dart.

"What we found was beyond startling and revolting," Dart told reporters at the cemetery.

The workers at Burr Oak, where lynching victim Emmett Till, blues legend Dinah Washington and some Negro League baseball players are buried among others, allegedly resold the plots, disinterred the bodies, dumped the remains and pocketed the cash, Dart said.

Most of the excavations occurred in back lots, where the plots were older and not frequently visited, he said. However, other plots may have been disturbed as well.

At least four people are in custody facing a slew of felony charges, authorities said. The current owners, who could not be reached by CNN for comment Wednesday, have run the place for more than five years, but are not believed to be involved, Dart said.

"We are sensitive to the fact that individuals have loved ones buried here and also the sensitivities as it pertains to this particular cemetery," Dart said. "This is the cemetery where Emmett Till is buried. Numerous other significant members of the African-American community are buried there as well."

He said authorities are "very confident" that the grave of Till, whose lynching at 14 helped spark the Civil Rights Movement, has not been disturbed.

Still, investigators are trying to determine the scope of the scheme and are faced with trying to track down the families of those whose graves were disinterred and those who, unbeknownst to them, purchased occupied plots, Dart said.

He said the workers may have doctored records to cover their tracks.

The FBI, expert forensic scientists and local funeral directors have been called in to help, he said.

"We cannot give people definitive answers at this point," Dart said. "Our biggest challenge right now is the attempt to bring peace of mind."

posted by truesee  # 11:10 AM
Comments:
A graveyard scam happen in Alpis, Illinois was really a crime. For those families who had buried their loved ones in the Burr Oak Cemetery cannot accept what they did, even they paid for a <a rev="vote for" title="Fast Cash Solves All Kinds of Money Problems" href="http://personalmoneystore.com/Personal-Loans/quick-Loans/fast-Cash/">fast cash</a> but still it’s not enough to what they did. 200 or 300 bodies was a large number of dead bodies they dug up. I hope the families of the victims would raise high charged for the 4 suspects for them to realize and know that the crime they did was big.