A paramedic was facing disciplinary action today after he walked into a supermarket crowded with shoppers wearing just a thong.

The ambulanceman had been on duty when he strode defiantly into the Tesco store wearing just the underwear and a pair of socks after staff refused to serve him while he was wearing his ambulance uniform.

Police were called in and interviewed the medic about his actions which were said to have left shop staff and customers embarrassed and stunned. 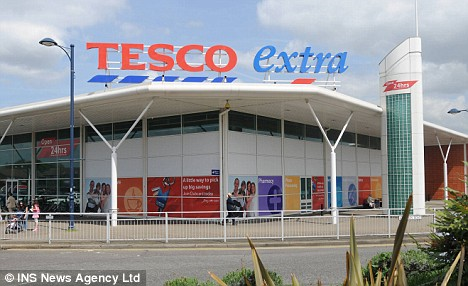 Supermarket showdown:The Tesco store in Addlestone, Surrey, where a paramedic stripped down to his thong and socks after being refused alcohol because he was wearing his uniform

The man, aged in his 40's, had walked into the large Tesco shop at Addlestone, Surrey wearing his full all-in-one green coloured ambulance uniform.

He selected a bottle of wine but become annoyed when the check-out assistant told him it was the store's policy not to sell alcohol to people wearing uniform.

The paramedic then stormed out of the shop, walked to his vehicle in the car park and took off his uniform.

However, he didn't stop there - and stripped right down to the thong and pair of socks he was wearing. Then he walked back into the shop and asked the same cashier:

'Now, I'm not wearing my uniform any more. Will you serve me now?' The assistant refused and the manager was called, along with the police. 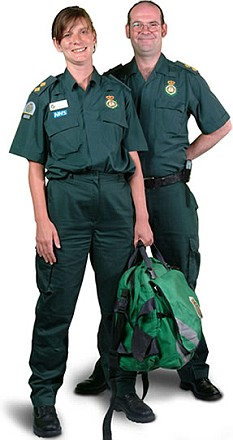 Refused: Tesco would not serve the man while wearing his full ambulance uniform (posed by models)

Rachael Monkton, who had been in the Tesco store shopping when the incident took place, said: 'He was shopping with a woman when the girl at the check-out said she couldn't let him buy alcohol.

'He got a bit agitated and the manager was called over but she took the side of her employee.

'So the paramedic stormed out, leaving the woman at the tills and when he came back he was just in his underwear.

'People were staring at him and laughing - I couldn't believe my eyes. Normally people would pay to see a man in uniform strip but we got a free show,' added Rachael.

A spokesman for Tesco confirmed that it was company policy not to serve members of the emergency services if they were wearing uniform and stood by the cashier's actions.

'It is absolutely right that the cashier did not serve him when he was in uniform but what happened afterwards was unprecedented,' he said.

'We realise that the customer may not have understood why he was refused alcohol but it was simply a member of our staff following company policy and the actions which followed were wholly unnecessary,' the spokesman added.

The paramedic, who is employed by the South East Coast Ambulance NHS Trust, Surrey division, was understood to have been spoken to by his managers and to be facing the possibility of suspension and disciplinary action.

It was the second time in as many months that a customer at the Addlestone branch of Tesco has stripped in the store in protest at actions of the staff.

In February, 68-year-old Norman Matthews took off his clothes after being wrongly accused of stealing a scratch card from the customer service desk.