Oregon Man Charged With Performing Surgery Without a License

Police in Oregon are looking for more patients of a man they say practiced medicine without a license, including minor surgery and procedures on a living room couch. 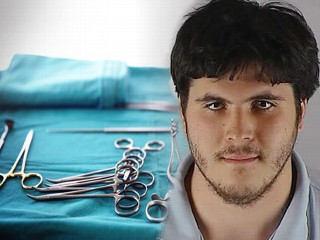 Police in Redmond, Ore., say Scott Hanson, 22, was giving exams, dispensing prescription medication and even performing surgery without a medical license. His mother told ABCNews.com that the incidents have been blown out of proportion by police and the media.
(ABC News Photo Illustration/KOHD)

Scott Hanson, 22, of Crooked River Ranch, was arrested Tuesday and charged with six counts of identity theft, second-degree assault, forgery, tampering with drug records and multiple counts of theft after one of his patients, a friend, realized he was not a doctor, as he had told her and his other patients.

He was also charged with six counts of recklessly endangering another person, third-degree sexual abuse, sexual harassment and various charges relating to possession of a controlled substance.

"Who knows how sterile any of the instruments were," he said, noting that these people were at risk of infections, or worse. "If you were treated by this individual, seek professional advice as soon as possible."

McNaugton said Hanson has had no formal medical training that police know of, but that he was offering treatment at "very discounted rates" and even dispensed medication. He would either visit the patients' houses or the homes of their friends -- in all, six procedures on three people.

"He was doing anything from treating people for infections to injury to minor surgery," he said.

An exam and prescription medication, which was dispensed on the spot, McNaughton said, would cost "patients" around $50. The surgical procedure -- there was only one police are aware of -- involved "maybe cutting off some skin and stitching things up," McNaughton said.

The charges of sexual abuse and harassment stemmed from one of his exams, McNaughton said, declining to further detail what led police to those charges.

But Hanson's mother, Renee Hanson, told ABCNews.com that police and the media have blown this up into something it's not.

"This is absolutely horrible, what the news has done," she said. "I'm so embarrassed. He's not performing multiple surgeries."

Renee Hanson said her son had planned to become a doctor, but that she didn't have the money to send him to medical school. Those plans, she said, are obviously over now.

McNaughton said Hanson told his patients -- both male and female -- that he was a resident physician at Mountain View Hospital in Madras, about 25 miles away from Redmond.

"One of the victims knew him for years, hadn't seen him for years," McNaughton said. "Came back and said, 'I went to medical school and became a doctor.'"

But Mountain View Hospital spokeswoman Christine Smith told ABCNews.com that the hospital didn't even know who Hanson was until the media started calling for comment.

"The only thing I know is he's never been employed by the hospital nor has he been part of our medical staff," she said.

Renee Hanson's public records list her as being a registered nurse at Mountain View, but Smith said she could not comment on whether Renee Hanson has ever been on staff there.

McNaughton said police understand that Renee Hanson works at an area hospital, but have received conflicting reports about which one.

She, however, denied to ABCNews.com having anything to do with her son's alleged crimes. "I'm having to leave town because of it," she said.

McNaughton said Hanson told police the medications he gave to patients included morphine. Police are now investigating where he got the drugs and what they actually are. "Some of the stuff we seized had the labels changed," he said.

A search warrant of Hanson's house, where he was arrested, also turned up various medical supplies and other evidence.

Hanson is now being held at the Deschutes County Jail on $50,000 bail.