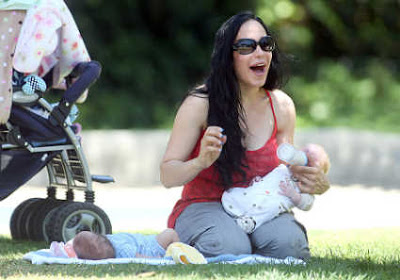 It took a while, but you knew it was coming, didn't you? Nadya Suleman, also known as "Octomom" because she world's longest-surviving set of octuplets has signed a deal to star in a reality television series.

However, Octomom is somewhat denigrating, and the reason for that is because, after the somewhat miraculous octuplet birth, it came to light that Nadya Suleman already had six children, and used in vitro fertilization for all of them, plus the octuplets. Admittedly, she herself said that she was basically obsessed with having a large family.

Suleman agreed to be filmed for a proposed television show by 3Ball Productions, attorney Jeff Czech said. Unlike many series, it won't be a 24x7 operation. Czech told USMagazine.com:

The show has no title yet, and Czech wouldn't disclose how much Suleman will get paid. There's always the chance that Suleman will get perks besides just cash; part of the deal that Jon and Kate Gosselin made for their series "Jon and Kate Plus 8" was a tummytuck for Kate and hair plugs for Jon.
posted by truesee  # 11:52 PM
Comments: Post a Comment