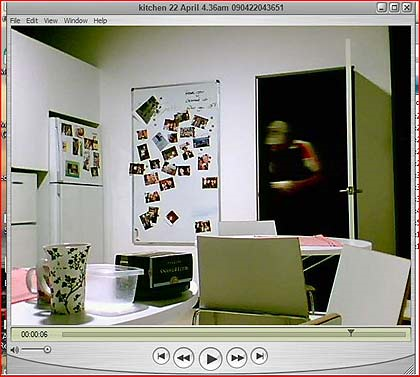 Caught on cerealcam ... the brekkie bandit.

A mystery intruder has been plundering cereal and sleeping on the couches for weeks at one of Sydney's marketing agencies.

Staff at the The Marketing Store were perplexed and slightly amused when, almost daily, they would arrive at their Ultimo office to find a trail left by their unwanted nocturnal visitor.

"My office was the starting point for it,'' said the agency's Asia Pacific president Doug Chapman.

"I'd come in and I'd notice somebody had been sleeping on the lounge or doing something in my office.

"All the cushions would be on the floor and it would be all messed up. I kind of wondered whether it was someone bonking on the lounge.''

Even more peculiar, was the absence of large amounts of cereal  - about six bowls a night - from the stocks in the office kitchen, and evidence that the showers had been used.

Fingers were initially pointed around the office.

"I put the word out through the office but nothing eventuated,'' he said.

"About four weeks ago I came in and it was in a particularly bad state - there were some tablets lying around, and some tobacco or weed on the floor.''

After reporting the matter to the building landlord and checking security passes, the company ruled out an employee, concluding the intruder had to be entering the building overnight.

But office security cameras never managed to point in the right spot to detect anyone, Mr Chapman said.

While the company hires creative people to promote clients' brands, it was a moment of genius from the woman who runs the kitchen that snared the unwanted visitor.

She came up with the idea of hiding a camera in a cereal box.

"She knew we were either huge eaters or someone was stealing cereal,'' Mr Chapman said.

"She got a cereal box and hid a small camera inside and put it on a benchtop in the kitchen.''

The camera was linked to a computer and activated by motion sensors, snapping clear photos of the intruder on his next visit and emailing them to staff, Mr Chapman said.

They showed the man slipping into the office via an overhead ventilation panel (the office is on the building's fifth and top floor) and then leaving via the fire escape.

On his next visit, the intruder was greeted by a security guard. The company called police, warned the man, but decided against pressing charges.

"We didn't want to press charges but we did warn him - told him it's a bit off-putting for the girls, and those who have to work late night.

"We took it very seriously ... although it was a little funny getting the daily updates.

"But we knew he wasn't stealing anything ... he could've easily taken computers, he didn't take any drinks.

"He was a particularly neat guy. He'd come in at 4am, have breakfast - and it was a hearty breakfast, six bowls - clean up after himself, shower and then leave.

The company doesn't know what the man's motives were - he wasn't interrogated - but it didn't appear that he was a typical vagrant.

"He was fairly young, in his mid 30s, and very clean cut for someone that was supposedly homeless.''

The company's office in Ultimo is situated close to a number of university and TAFE campuses, and also near a lot of students accommodation.