Woman watches her home being burglarized on webcam

(CNN) -- Jeanne Thomas was sitting at her desk at work when she decided to check the security camera that she installed in her home. The Thomas home had been burglarized before, so she installed a monitoring device where she can watch a live video feed of the camera in her home. 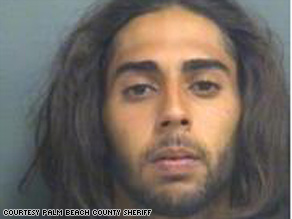 Steven Morales, 19, was arrested in the invasion of a Boynton Beach, Florida, home.

When Thomas decided to pull up the feed of her house Wednesday morning, she couldn't believe what she saw. There was someone inside her home, someone she didn't know. Thomas picked up the phone and called 911.

"I'm watching my home on live monitor, and there is a black man in my house, and he is robbing it," she told the dispatcher. The woman on the other end of the call asked Thomas where she was, and Thomas replied, "I'm in Fort Lauderdale, at my work."

To watch the  video of burglars in her home and listen to the 911 call.  Click the link below

Thomas' home is in Boynton Beach, Florida, more than 20 miles away, yet she was watching over the Internet as two men walked through her home, picking up items.

According to the Boynton Beach Police, Williams and Morales entered the house through a pet door. As the 911 dispatcher was calling police to the scene, Thomas stayed on the line, giving a play-by-play of what she was seeing.

"He's in my house. I am seeing him walk around my house. He's in my bedroom right now," she said. The bedroom cannot be seen in the video, but the door from the living room into the bedroom is visible.

Thomas watched as the men wandered through her home, taking valuables such as her TV and Wii gaming console.

"This is unbelievable," she told the 911 dispatcher. "The cat is freaking out. The dogs are hiding."

One of the burglars took a bag of shredded cheese from the refrigerator and could be seen on the video stuffing it in his mouth. None of them noticed the small camera that resembles an air freshener.

"They walked right up to it and didn't know what it was," Thomas said later.

According to the police report, "Williams and Morales had placed the victim's 37 inch flat screen TV, a safe, gaming machine with several misc. games (total value approx. $3000) on the victim's bed."

Williams and Morales told police that two other people, not seen on video, were also involved in the incident.

All four suspects were arrested and charged with burglary of a dwelling and attempted grand theft.

Thomas' husband thought she was nuts for spending $250 on the webcam system, telling her she would never catch anyone. But to her, it now seems like a smart investment.

Thomas hopes it will be a lesson for burglars.

"You never know who is watching you," she said.

posted by truesee  # 8:57 PM
Comments:
As if getting her house robbed by a white or asian man is any better?

# posted by time*treat : 12:27 AM
Oh, puhleeze! This is not about race. The woman was freaking out watching burglars in her home while her pets were hiding. The family cat was picked up by the man in the video and he was walking off with her.   I didn't hear any racial slurs, just a description of what was going on. When someone is robbing you and endangering your pets, it's not the time for political correctness.

# posted by justxploring : 1:53 AM
Big brother in action. Good for her hope she can recover all that was stolen previous to this burglary. Some local news articles have said thieves return to same location a second and third time.