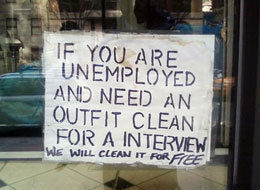 This story may be an oldie, relatively speaking, but it's still a goodie -- and a viral one at that! Dry cleaners around the country are offering their services at no cost to unemployed customers who need their suit cleaned for an interview. It all began at Upper East Side dry cleaner First Professional Cleaners. A handwritten sign in their window reads, "If you are unemployed and need an outfit clean for an interview, we will clean it for free." According to the Daily News, it's owner Carlos Vasquez's way of giving a helping hand. "It's just something I do to give back to the community," explains Vasquez. "It's to thank them for the support that I get around here, for letting my business keep going by bringing me their clothes." And he's not alone.

High Point-based "A Cleaner World" cleaners made a similar announcement less than two weeks ago. ABC News' local affiliate in Durham reports that for unemployed job seekers, A Cleaner World "will clean a suit or a blazer and slacks, plus two shirts per week. Women can get a suit and two shirts or blouses or two regular dresses per week."

And Elite Cleaners in Minneapolis has also generously followed suit. Owner Don Chapman has donated his services to 2000 unemployed -- an offer he estimates will cost him $32,000.

posted by truesee  # 3:50 PM
Comments:
Nice story. On the other side of the coin, dry cleaners are finding that a high percentage of their customers aren't picking up clothing after the 30 day maximum. I watched a program showing how you can pick up a really nice suit for the price of the dry cleaning.   Some dry cleaners are selling the abandoned clothes to make up for their loss. Can you blame them? They're not trying to make a profit, just cover their costs. One store said he even called the tel # on the ticket, but many of them are disconnected.   I can't imagine leaving clothes at a dry cleaner for more than a week, but that's just me.