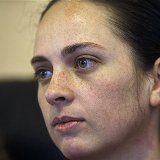 A North Carolina mother who reported for Army duty with her two young children said Friday she is happy and relieved that the military granted her an honorable discharge.

Lisa Pagan was back home in Davidson on Friday after spending a week at Fort Benning, waiting to learn if she would be put on active duty, possibly facing a tour in Iraq or Afghanistan.

In her first interview since leaving Fort Benning, Pagan said it was "nice to be home."

"After I was told I could leave, my first thought was: God finally answered my prayers. I've been going to church every weekend and saying my prayers. I'm just going to let this set in. I know what I did was controversial, but it was something I had to do," she said.

Pagan had been fighting the Army since she was recalled to active duty in November 2007, saying she had no one to care for her children.

A former truck driver in the Army, Pagan was recalled four years after being released from active duty, which is allowed under the military's "individual ready reserve" program.

Soldiers can appeal, and nearly a third have won permission to remain in civilian life. Pagan filed several appeals, arguing that because her husband travels for business, no one else can take care of her kids. Her appeals were rejected.

So she reported for duty Monday at Fort Benning, Ga., with her children, 4-year-old Elizabeth and 3-year-old Eric.

Her children spent the week in an Army day care center, while she was processed for active duty — filling out paperwork and undergoing medical tests. But from the time she arrived, she said she believed she would be discharged.

"My commander was very supportive," she said.

Waple agreed, saying the commanders at Fort Benning were "a breath of fresh air."

"When Lisa and her husband made the decision she would comply with her orders to go and report to Fort Benning, the jurisdiction in her case changed from the reserve command in St. Louis to the command at Fort Benning. And evidently, they took a closer look at the situation and made the right decision," he said.

Pagan is among thousands of former service members recalled after leaving duty since the Sept. 11 attacks because they're on "individual ready reserve" status, meaning they have time left on their original enlistment contracts and can be recalled at any time.

Master Sgt. Keith O'Donnell, an Army spokesman in St. Louis, has said that of the 25,000 individual ready reserve troops recalled since September 2001, more than 7,500 have been granted deferments or exemptions.

About 1,000 have failed to report, and most of those cases are still under investigation, he said. Another 360 soldiers have been separated from the Army either through "other than honorable" discharges or general discharges.

Pagan, who held the rank of specialist, said she was worried about receiving a dishonorable discharge.

On the roughly six-hour drive home, she said she so happy she called her husband, who was on a business trip in Ohio, to share the good news.

"He was excited," she said. "Now we can focus on other things. The whole thing has been stressful. I'm just glad it's over," she said.

Copyright 2009 The Associated Press. All rights reserved. This material may not be published, broadcast, rewritten or redistributed.