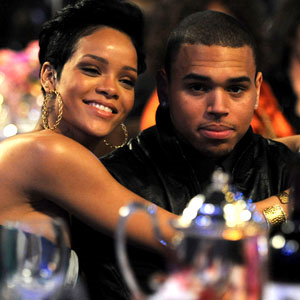 Rihanna  and Chris Brown
Los ANGELES – The only Grammy Awards anxiety Chris Brown was supposed to feel was over whether he'd win one. Instead, the R&B singer remains mired in suspicion over an allegation of domestic violence.

Following Brown's arrest late Sunday night on suspicion of making a criminal threat and subsequent release, plenty of questions remained: Was there a physical attack, and if so, against whom was it committed?

Officers received a 911 call about an incident in which a woman accused Brown of hurting her. Authorities have not identified who that woman was, citing confidentiality for victims of domestic abuse.

The 19-year-old Brown, who had left the scene before authorities arrived, turned himself in to police while the Grammy Awards were going on Sunday without him — and also without Rihanna, who, like Brown, canceled her scheduled appearance.

Brown was released after posting $50,000 bail. Pickett described the singer as "professional" during processing.

Rihanna's publicist declined to say why the singer did not appear, saying only that she was "well" and expressing thanks for the concern. Brown's representatives also refused to discuss the allegations or his arrest.

News of the incident broke as stars were showing up the Grammys. Police said in an initial news release, sent 90 minutes before the show began, that the woman accusing Brown showed visible injuries.

Still, Brown was not booked on suspicion of physically hurting the woman. Pickett said a criminal threats charge indicates a person makes a threat and has the capacity to carry it out.

"There may be domestic violence charges added later, but that will be up to the district attorney's office," Pickett said.

Less than an hour after the ceremony ended, Brown left a police substation with his attorney as numerous photographers tried to get a shot of him on the way out.

Pickett said Brown did not appear to have any physical injuries. She said she did not know who placed the 911 call and a police spokeswoman said the department would not release the tape.

Brown did not win in either category for which he was nominated: pop collaboration with vocals for "No Air" and male R&B vocal performance for "Take You Down."

posted by truesee  # 4:49 AM
Comments:
I told my husband on Saturday that these 2 were gonna have trouble in paradise soon, but I didn't think it would be along these lines.
:-(

# posted by NBey6 : 3:27 PM
I just hope that the rumors of him assaulting her or any other female isn't true.