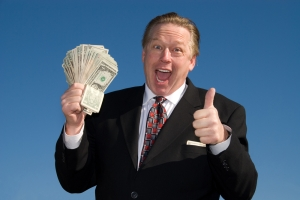 It was no ordinary raffle Friday for the 24,000 people who brought a $50 lottery ticket. They were playing for a chance to win a custom million-dollar home. The big drawing was held at Annapolis Mall.   Karen McHale of Idaho Springs, Co., was the big winner.

"I couldn't believe it. I thought it was a crank call," McHale laughed during a phone interview Friday night from her Colorado home. "I'm one of those people that never win anything."

But win she did.

The prize is Tom Walters' 6,000-square-foot dream home in Edgewater, Md. Walters decided to raffle the house off after 15 months of construction and hundreds of thousands of dollars in renovations. His dream went bust when the economy tanked.

The home's property value plummeted at the same time Walters' paycheck shrank. When he could not find a buyer, Walters decided to raffle the house off. He sold 7,000 fewer tickets than he had hoped to. The tickets were sold online across the country and around the world.

Winner McHale is a married chemical engineer and volunteer firefighter with two grown children. She has no plans to move to Maryland but she does hope to keep the house.

"Use it as a vacation home or rent it out maybe," said McHale.

Play Video
... house for $50!! Charity house raffle.
posted by truesee  # 8:34 AM
Comments:
Unless the house comes with a check, the "winner" is in for a nasty surprise from the tax man.

# posted by time*treat : 11:03 PM
I don't know what the tax rate is on raffles and prizes. I do know that in the State of Maryland she will be pay or she will find that house up for auction.