Two men who drifted helplessly for 25 days in a large icebox through shark-infested waters have been rescued after a chance sighting by an aircraft crew.

The men were found desperately waving their shirts as an Australian Coastwatch plane flew across the Torres Strait, between Australia and Indonesia. The plane's crew called for a rescue helicopter.

After being winched up into the helicopter, the men identifying themselves as Burmese, told their terrifying story of how their fishing boat with 18 others  aboard  broke up in rough waters and everyone was thrown into the sea.

The pair are believed to be the only survivors. 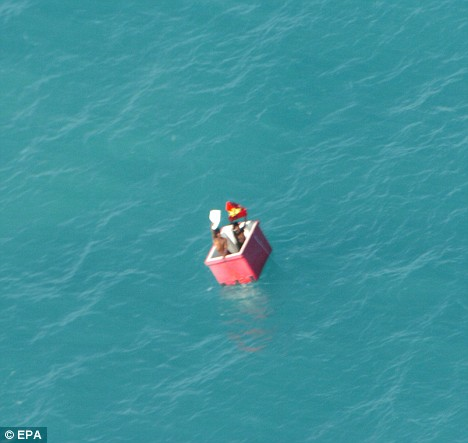 Survivors: These two Burmese men waved their shirts at passing aircraft crew after floating around for almost a month in a giant icebox

'We are so glad you found us - we couldn't have lasted much longer,' the men told their rescuers after being hauled into the helicopter from the 5ft by 4ft box, used to store fish in ice.

It is understood the men managed to survive by drinking rain water that gathered at the bottom of the box and by eating pieces of fish that were also in the container.

As soon as they were hauled into the helicopter they gulped down fresh water that was offered to them.

'We drifted for hundreds of miles and although we think some ships saw us they didn't come to help.

'Even when the fishing boat we were on sent out distress signals, no-one responded and when the boat sank we had to grab what we could or we would drown.'

The men said the old and creaky fishing boat was some 200 nautical miles north of Australia when it began to break up and 'splintered into the ocean'. 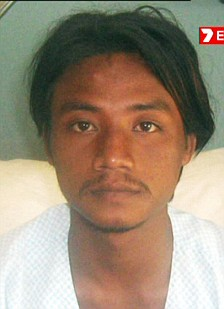 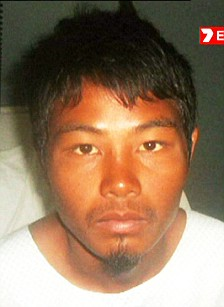 The two fishermen were pictured in hospital last night. Though they have been pictured they still have not been identified

As the boat went down, the Burmese men climbed into the icebox as other crew members searched for something to hold on to as they slipped into the water.

'We saw a Thai man floating past us but we couldn't reach him to help.'

The men said there were a total of 11 other Burmese crew and seven Thais on board - but so far no-one has been found.

Days and nights passed as the men, jammed in the ice box, drifted through shark infested waters, helpless to do anything but allow the tide to carry them along.

At times, they said, they feared they would be thrown out when the seas turned rough.

Finally they were spotted by the Coastwatch aircraft, which flies around northern Australia on the look out for illegal immigrants and fishermen illegally entering Australian waters.

The plane's crew summoned a rescue helicopter, which finally ended the men's ordeal. 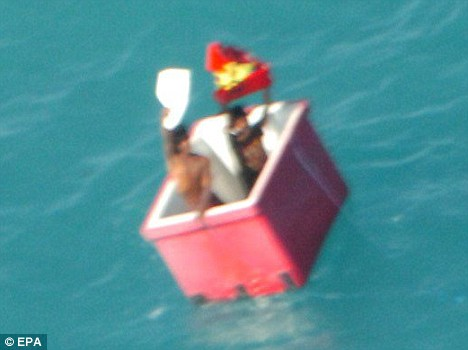 The pair are believed to be the only survivors

Helicopter pilot Terry Gadenne told Australia's Channel 7: 'They were ecstatic to see us.

'When we winched down the rescue crewmen into the water, a guy in the esky (ice box) leaped out.

'When they both got up they sculled (drank) two litres of water each within seconds.

'It's a bloody big ocean to be drifting around in.'

Tracey Jiggins, a spokeswoman for the Australian Maritime Safety Authority said the men could not have survived 25 days in the water without a floatation device