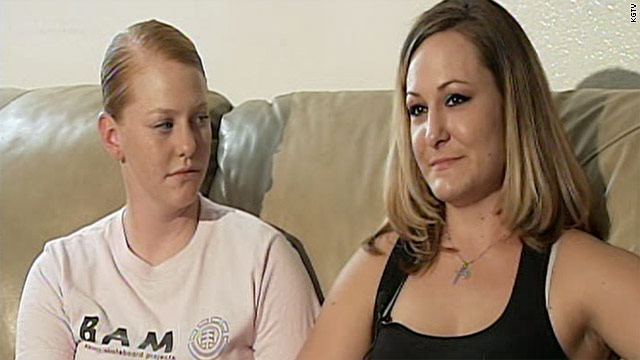 Marine Cpl. Ashley Vice, left, and Jaime Murphy say they each married a Marine to receive stipends offered to married couples.
STORY HIGHLIGHTS
(CNN)-- Three California Marines have been charged with marrying for financial gain, accused of manipulating the military's off-base housing program so a lesbian couple could live together, according to a woman at the center of the case.

Marine Cpl. Ashley Vice says she and two others have been charged with conspiracy, making false official statements, fraud and adultery for allegedly marrying to collect thousands in financial assistance offered by the military to heterosexual married couples.

"The bottom line is that every Marine knows if they violate the law, they will be held accountable for their actions," 1st Lt. Maureen Dooley, a Marine spokeswoman at Camp Pendleton, told CNN.

"Regardless of sexual preference, we will hold all Marines accountable to the same standards."

Dooley would not release details about the case, saying the "investigation is ongoing."

Vice told CNN affiliate KGTV in San Diego that she wanted to live off base with her girlfriend, Jaime Murphy, as a couple. Murphy is a civilian.

But on her salary, she couldn't afford it.

So she says she found a Marine, Jeremiah Griffin, who agreed to marry her so she could receive the $1,200 per month living stipend the Marine Corps gives to married couples living off base.

A year and a half later, Murphy did the same thing and married Marine Joseph Garner, Vice and Murphy told KGTV, according to footage that aired Thursday.

Vice said she was questioned by the Marine Corps about the living arrangements.

The three Marines are accused of pocketing about $75,000.

"There's no conspiracy here," Murphy told KGTV. "There's no trying to steal from anybody. We just wanted to be together and she wanted to serve her country."

Vice and the two others face up to a year in prison if convicted on all counts. They also face the possibility of a dishonorable discharge, a reduction in rank and forfeiture of all pay.

posted by truesee  # 6:49 AM
Comments:
No stipends = no stipend fraud.