Diddy on Barack Obama: 'He Owes Us' 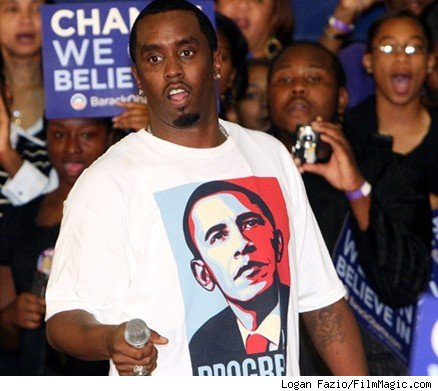 Mr. "Take Dat" himself, Sean "Diddy" Combs, is upset with President Barack Obama, and he took his beef where most hip-hop artists do... straight to the Source.

In the January issue of "the hip-hop Bible," the entrepreneur extraordinaire claims that President Obama, in the infamous words of Kanye West, "doesn't care about black people."

"I love the president, like most of us. I just want the president to do better. There's a difference between us voting for somebody and us believing in somebody. He's the person that we believed in, so I pray night and day that he understands how God ordained his presidency. I feel there was a promise made to God to look after people that was less fortunate, and [many] of those people are African American."

Combs' bold 2004 "Vote or Die" campaign was revisited in the historic 2008 election with a more partisan mantra: "Obama or Die." The mogul's support and loyalty apparently makes him an authority on what the POTUS should do for the African American community.

"It's something he might not get reelected for, but we elected him," Diddy said. "He owes us. I'd rather have a black president that was man enough to say that he was doing something for black people than have a one-term president who played the politics game [to get re-elected]"

I cannot be the only one who finds Diddy's ire a tad hypocritical. While Obama is known to address the importance of family and takes African American men to task for their sometimes irresponsible behavior, Combs has five children, and has yet to marry, or otherwise show any visible respect for any of the three mothers. Yes, three mothers.

While our president has stressed education, and the importance of recognizing the "winner of the science fair, not just the Super Bowl," Combs' pool of talent gets younger and younger, and the "money, cash, ho*s" mentality seems to be drilled into them at Bad Boy boot camp.

While I agree that the president needs to grow a backbone and address the inequalities that the African American community faces with the same fire and conviction as he addresses the plight of the Hispanic/Latino community, in general he has passed more legislation to elevate the plight of all Americans than any executive in history.

It is true that Combs' philanthropic efforts are to be admired; however, he should put his mouth where his money is. Hip-hop has long been emulated by our youth, and the misogynist lyrics and hedonistic lifestyle poisoning their brains is just as much of a crime, if not more so, than another president without a "black agenda."

posted by truesee  # 8:54 AM
Comments:
sean don't feel bad as obama is doing the same for middle class whites too.sorta like in egypt,everything for the wealthy,but he might change just before election.

# posted by scorpio : 9:13 AM
I really think the President should put more emphasis on the plight of Black America given the fact that the unemployment rate is somewhere in the range of 20 plus %. Forget the Republican and the Teabaggers their on a witch hunt anyway, there is nothing that will please them until he out of office with this none S*** and their hatred of the changing of the world to the 21st century.Still trying to hold on to the me, me, syndrome.While making their fortune on the backs of the middle class and the poor.Lots of that money they so proudly displaying is illegal. There nothing to say about Republicans , their like(a scene right out of the Titanic movie) by taking a child that didn't even belong to them just to get on the boat with women and children to save their wretched lives.All for self.

# posted by louise black : 12:27 PM
The best type of leader will not give the appearance of favoring one group over another. To that extent, I agree with the author. Combs is very wrong, IMO.