Man fakes heart attack to get out of speeding ticket 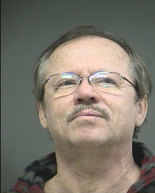 Beaverton Police DepartmentGeoffrey Burke
Beaverton police have accused a man of faking a heart attack to get out of a speeding ticket Wednesday afternoon.

Shortly after 3 p.m., an officer pulled over a Chevy Tahoe traveling 46 miles per hour in a 30 mile-per-hour zone at Southwest Allen Boulevard and Wilson Avenue, said Officer Pam Yazzolino, a Beaverton police spokeswoman. The driver reportedly told the officer he was on his way to the hospital because he believed he was suffering a heart attack.

The driver complained of chest pain, Yazzolino said. He reportedly said he had numbness in his left arm and couldn't move it.

The officer called for paramedics to respond. They arrived and began treating the man.

While in an ambulance en route to a local hospital, Metro West paramedics repeatedly tried to place an intravenous line in the man's arm, Yazzolino said, but he kept pulling it out.

"His heart was fine and he wasn't having a heart attack," Yazzolino said.

So, the man, whom police identified as 55-year-old Geoffrey Burke, was reportedly discharged from the hospital into police custody. Yazzolino said he was lodged in the Washington County Jail on accusations of initiating a false report and disorderly conduct.

Burke – who had a Kentucky driver's license, but gave authorities a Sherwood address – was also cited on accusations of speeding, driving while suspended and driving uninsured, Yazzolino said.

At the time of the traffic stop, Burke's dog, Yazzolino said, was the only other passenger in the vehicle. It was picked up from the scene.
posted by truesee  # 10:14 PM
Comments: Post a Comment