UFC Fighter Jacob Volkmann Calls Out President Barack Obama, Gets A Visit From the Secret Service 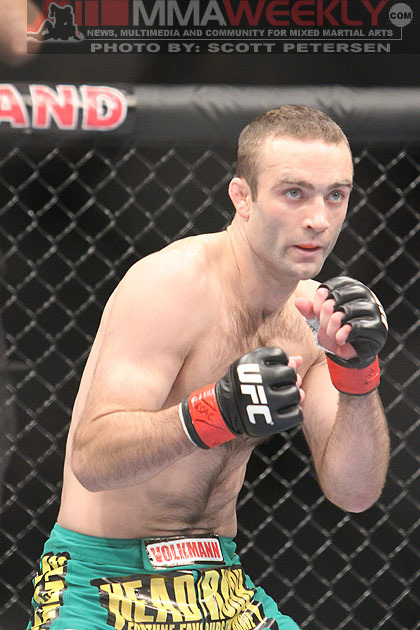 UFC lightweight Jacob Volkmann, following his UFC 125 win over Antonio McKee, declared that he wanted to fight President Barack Obama for his next fight.

His words got him a visit from the Secret Service on Tuesday.

Volkmann, who is based out of Minnesota, told MMAFighting.com after his win over McKee that he wanted to face Obama because he disagreed with many of his policies.

After defeating McKee, Volkmann was asked who he would like to fight next. Volkmann first requested Clay Guida, then said “Actually, Obama. He’s not too bright … Someone needs to knock some sense into that idiot. I just don’t like what Barack is doing.”

That comment got the government’s attention, as just days later, the Secret Service came to chat with the fighter.

“It happened on Tuesday, I was coaching youth practice, and then two guys came up and one of the other coaches that was helping me out, they said there was a cop and another guy out there waiting for me,” Volkmann told MMAWeekly.com. “I went out there and the guy introduced himself and said he was from the Secret Service and he wanted to ask me some questions about UFC 125 and my quote. He said there were people calling in to D.C. telling them that somebody, me, was threatening the President.”

The Secret Service showed up both at his residence and during a youth wrestling camp he coaches.

The interview is a formality, as the Secret Service investigates all potential threats made against the President, but Wednesday should be the close of the matter for Volkmann.

“This guy had the whole interview on a piece of paper and it had my picture and everything,” said Volkmann. “He was like ‘is this what you said?’ and I said, ‘yes it is.’ He’s like ‘I want to let you know I’m a little embarrassed for coming here and doing this because obviously nothing happened.’ He actually apologized for coming, but he had to come. He wanted to make sure I wasn’t going to D.C to hurt the President.

“The thing is, I got home and I checked my e-mail and I had about 20 e-mails and one of them, one of ladies had actually contacted the FBI and the Secret Service, and she was telling me that she was going to do it.”

The person who contacted Volkmann, according to the fighter, was a member of the election committee that worked for President Obama’s campaign.

Volkmann, who is also a chiropractor, wanted to clarify the statements he made in the original interview as well, because he says that was the reason most people seemed upset with him in the first place.

Volkmann, a chiropractor, says that he was trying to make a point about the health-care law, with which he disagrees. “People were misunderstanding the point of view I was going for with the health care plan. That’s why they were getting so upset. I’m thinking about the provider, I’m a chiropractor, so I’m thinking about my point of view, not everyone getting insurance. They don’t have to worry about getting denied, which is good I guess, just not good for health care providers,” said Volkmann.