John Boehner: I'd Support Obama's Tax Cuts Package If I Had No Other Choice 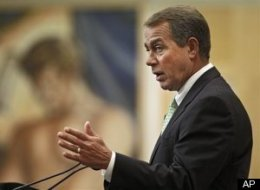 House Minority Leader John Boehner (R-Ohio) on Sunday offered one the sharpest indications to date that the GOP may be willing to allow the Bush tax cuts for the rich expire at the end of this year.

In an interview on CBS's "Face the Nation," the Ohio Republican said that he would support an extension of the Bush tax cuts just for those making under $250,000 a year if that was the only vote he'd get. His preference remained a full extension for all rates.

Bob Schieffer: "I want to make sure I heard what you said correctly: You're saying that you are willing to vote for those middle class tax cuts, even though the bill will not include ... extending the tax cuts for the upper bracket American."

Rep. Boehner: "Bob, we don't know what the bill's going to say, alright? If the only option I have is to vote for those at 250 and below, of course I'm going to do that. But I'm going to do everything I can to fight to make sure that we extend the current tax rates for all Americans."

This is a step further in terms of political compromise than that offered by Senate Minority Leader Mitch McConnell, who has said he'd be open to a temporary extension for all the Bush tax cuts (as opposed to, say, an indefinite extension).

The remarks were a bit of a game-changer in the context of the Bush tax cuts debate -- granting the Obama administration the green light to push forward with legislation that would allow rates for the wealthy to revert to Clinton-era levels. It also puts the spotlight on moderate Democrats who have, so far, pushed for keeping rates the same across the board.

"This means President Obama won't be able to blame R's for 'holding the middle class hostage,'" said a top Republican aide in Congress. "He, and the media, will have to face the fact that the real problem is among the Democrats."

But while Boehner may have made news for hinting that the GOP won't oppose the President's tax cut policy, he also offered a fairly substantive admission later in the interview. Explaining why he thought it would be bad economics to let the tax cuts for the wealthy expire, the minority leader acknowledged that only 3 percent of small business members would be affected by the hiked up rates.

Rep. Boehner: Well it may be 3 percent, but it's half of small business income, because obviously the top 3 percent have half of the gross income for those companies that we would term "small businesses." And this is why you don't want to punish these people at a time when you have a weak economy. We need them to reinvest in their business.

posted by truesee  # 2:45 PM
Comments:
They are not tax cuts for the rich, to call it that is mis-leading, it will hurt middle class families, who are the backbone of this country.