Will Smith's friend a big target for armed robber


Will Smith's friend a big target for armed robber

Police said a knuckleheaded crook made that very mistake when he tried to hold up Charles "Charlie Mack" Alston, a human skyscraper and friend to Hollywood stars, at a West Philly gas station early yesterday.

It took Alston all of a few seconds to overpower the robber, who was armed - but about eight inches shorter and 80 pounds lighter.

"I guess he felt like he had the upper hand because he had a gun," shrugged Alston, 44, a movie producer, hip-hop-recording manager and longtime pal of Will Smith.

Alston said his encounter with the gun-toting thug went something like this:

Shortly after midnight, he pulled into the Sunoco A-Plus minimarket at 38th Street and Girard Avenue in his BMW convertible to get gas.

He chatted on the phone with his daughter, who was celebrating her 21st birthday, and bought a T-shirt from a street vendor nearby.

When he got back into his BMW, he said, "This dude runs up and puts a gun in my stomach.

Alston, a Philly native, said he motioned to a pocket on his right leg that contained about $3,000 in cash.

Alston said he pulled out the cash and immediately grabbed onto the man's gun, then forced the crook to the ground.

The robber screamed for help, Alston said, and then bit Alston on the right hand and scratched his face.

Police said the crook took off after Alston got control of his gun, but not before grabbing about $2,700 of Alston's money.

Alston, who lost two brothers to gun violence and whose annual summer "Party 4 Peace Celebrity Weekend" will again draw celebrities and star athletes to the city July 23-25, said he feels bad for his assailant.

"We never know what the circumstance is," Mack said. "He could be a bad seed, or trying to feed his seed. To me, it's sad." 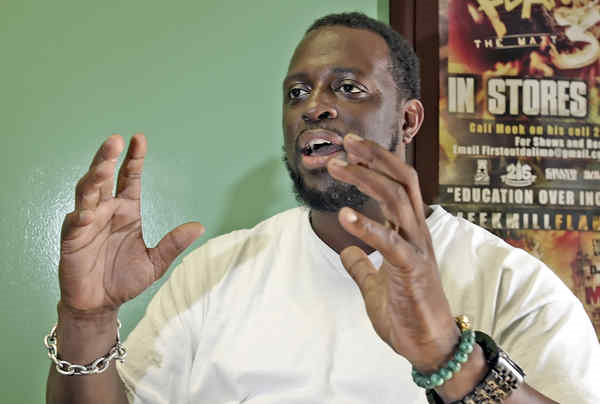