Was Mystery SC Candidate Actually Part Of A GOP Plot? 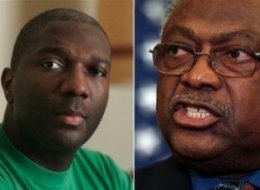 Is something fishy going on with Alvin Greene, the man who clinched an unlikely victory to become the Democratic nominee for South Carolina Senate? Fellow South Carolinian Rep. James Clyburn (D) thinks so, and on Thursday went as far as to say that Greene might be a "Republican plant."

Speaking with liberal radio show host Bill Press, Clyburn questioned Greene's improbable victory (Greene had no campaign signs, no website, and was largely invisible in the lead-up to Tuesday's primary) and said that his candidacy warranted an investigation by the U.S. Attorney's office.

"There were some real shenanigans going on in the South Carolina primary," Clyburn said of Tuesday's race. "I don't know if he was a Republican plant; he was someone's plant."

Clyburn said the circumstances of Greene's entry and eventual upset of the race were baffling.

"What is an unemployed guy doing paying $10,000 to run for the United States Senate? That just doesn't add up," Clyburn said of Greene, an unemployed military veteran who somehow came up with the $10,400 filing fee and decided to use it to mount an unlikely bid against conservative champion, Sen. Jim Demint. Greene ended up taking 59 percent of the vote despite his relative anonymity.

Clyburn went on to say that a U.S. attorney should examine the possibility that his limited campaign was improperly funded by outside political interests.

The South Carolina Democratic party asked Greene to withdraw his Democratic nomination on Wednesday after it came out that he was facing a felony obscenity charge after allegedly showing inappropriate pictures to a college student last fall.

Clyburn gave an interview to Talking Points Memo later Thursday and pushed the issue further, saying that a potential probe by the U.S. Attorney's office should extend to two other African-American Democrats whom he believes may also be party impostors with ulterior motives.

Apart from Greene, Clyburn alleged that Gregory Brown, who mounted an unsuccessful campaign against Clyburn for the 6th Congressional seat, and Ben Frasier, who triumphed over state Democratic party-backed candidate Robert Burton to become the nominee for the 1st Congressional district, were also plants.

Beser said that since election night the Burton campaign has been doing precinct tallies and has seen numbers that far surpass what turnout had expected to be, including all-white precincts where Greene beat Senate candidate Victor Rawl and Frasier beat Burton. Both Rawl and Burton are white. "None of it makes sense," she said.

posted by truesee  # 4:15 PM
Comments:
Why is it that there should be an investigation when Democrats find themselves on the short end of the stick but not when they break the law.

Obama offered a job to a man running for Congress to get him out of the race; not once, but twice. There is a law against doing things like that. Where are the Democrats calling for an investigation?

Democrats only call for investigations when they feel they have been slighted and never call for one to uphold the law. This tells me Democrats really don't care for the Constitution or the law except when they benefit.