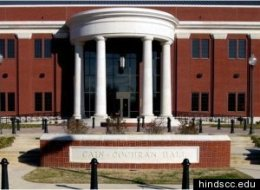 A Mississippi community college is cracking down on cursing -- by charging students money when they utter an off-color word.

At Hinds Community College, swearing can get you in trouble. "Public profanity, cursing and vulgarity" are all punishable with a $25 fine for a first offense, and a $50 fine for a second offense. Further, the offense of "flagrant disrespect" (which may be demonstrated by swearing, as became clear Tuesday when a controversy over the code went public) can earn a student demerits that could lead to suspension.

Hinds appears to be relatively rare among public colleges in regulating speech in this way. And the Foundation for Individual Rights in Education has taken up the case of a student who faced charges following an incident in which -- after class, but in the presence of an instructor -- he said that a grade he had just received was "going to up my entire G.P.A." The instructor first threatened to place the student in detention and when the student pointed out (correctly) that the college doesn't have detention, the "flagrant disrespect" charges were made.

Many say the policy is a flagrant abuse of the First Amendment, but some academics agree that curbing sometimes out-of-control profanity on campus can be difficult, especially as more students feel entitled to be rude.

What do you think?