THIS STORY IS WRITTEN BETTER 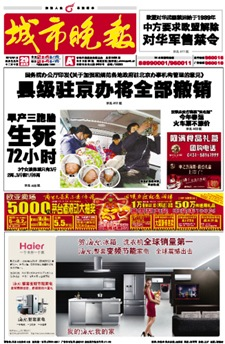 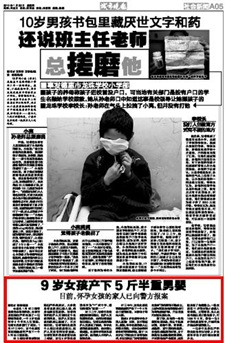 City Evening News reports on January 25, Changchun hospital gynaecology department took in a special patient, a 9-year-old girl who was 8 and half months pregnant.  On January 27, at noon, this girl gave birth by cesarean section to a 2.75 kilogram (about 6 lbs) baby boy.

On January 25, reporter went to the gynaecology department of the hospital, most of the patients and family members were asleep; the hospital hallway was very quiet.  Reporter approached the hospital staff asking for information on this girl and the staff member said please do not disturb because the girl and the family were already asleep.  Reporter than asked about this girl’s personal circumstances and situation, but the staff member did not disclose anything.  The reporter learned the 9-year-old girl’s name from the registration form and the registration condition was “pregnant…”

On January 26, the reporter once again went to the hospital to ask about the situation, but the hospital workers avoided the subject like it was a taboo. The reporter learned from the nurse in the ward, the pregnant girl’s family is from Songyuan and she looks very mature, but was unclear about how she got pregnant, her family never talked about the matter.

On January 27 at noon, the girl in the hospital gave birth to a baby boy after a caesarean section, the baby weighted 2.75 kilograms.  Currently both mother and child are in good health.

Who impregnated a 9-year-old girl?  It is still unknown at this time.  But it was said that the girl’s family already reported the incident to the police.  lawyer Liu from Liu Gongcheng Law Firm in Jilin said, in view of women under the age of 14 do not have sexual rights, so any argument of “being consensual” (not going against women’s will) in defense is completely untenable.  Anyone who had sexual relation with a girl under 14 constitutes rape, and is to be punished severely.

It is understood that women have 5 development periods in their lives; they are infancy, adolescence, maturity, menopause and post-menopause.  When women in maturity, due to ovary being fully mature and ovulate on a regular bases, also periodically produce hormones, therefore they have the reproductive capability.  Usually girls hit their puberty after age 11.  Normally speaking, a woman can give birth only after menstruation.  However in May of 1939, a 5-year-old girl in Peru was pageant and successfully gave birth to an infant.

A female doctor, long time gynecologist told the reporter, a 9-year-old girl getting pregnant and giving birth is very rare.