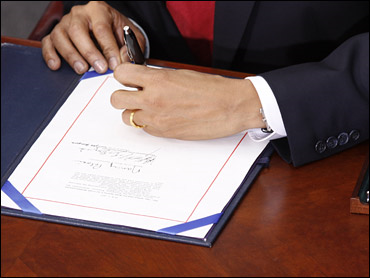 According to the multiple highly-regarded, non-partisan economic research firms, President Obama's economic stimulus package, which will likely ultimately cost around $862 billion, has in its first year saved or created at least 1.6 million jobs.

Yet just about the only people who seem to realize that fact seem to be the number-crunchers who put together the data: According to a CBS News/New York Times poll last week, just six percent -- six percent -- of Americans believe the stimulus package has created any jobs at all.

That gulf between perception and reality explains why the White House is still selling the Recovery Act a year after the program was signed into law. President Obama and Vice President Biden went before the cameras Wednesday to laud the impact of the bill while also acknowledging that the economic recovery it has helped spur "doesn't yet feel like much of a recovery," as the president put it.

It's easy to see why. Upon signing the bill just a month into his time in office, Mr. Obama lauded the stimulus as "the beginning of the end" to the economic crisis -- and promised that it would be responsible for 3.5 million jobs over two years. But while the economy has clearly turned around, with job losses slowing significantly and the overall economy shifting from contraction to expansion, the jobs numbers have lagged. The unemployment rate spent most of last year at or around 10 percent, and there are fewer people overall working today than there were when Mr. Obama signed the bill.

Most knowledgeable economists believe the stimulus bill significantly lessened the impact of the recession, but it did not obliterate it -- which helps explain why Americans don't see the bill as having been particularly effective. A larger stimulus bill, which some both in and outside the White House pushed for last February, might have had a more noticeable impact, though it also may not have made it through Congress.

The non-partisan Congressional Budget Office estimated last year that through three quarters the bill had lowered the unemployment rate by between 0.3 and 0.9 percent and grown the economy between 1.2 percent and 3.2 percent. (The CBO also said -- again, through three quarters, not the whole year -- that the stimulus had generated between 600,000 and 1.6 million jobs.)

Some of the fault for the perception/reality divide also lies with the White House. The tax cut portion of the bill, for example, didn't come in the form of a government check -- it simply left more money in Americans' paychecks. That meant many Americans simply didn't notice they had gotten a tax cut. Only 12 percent said they had received one in the CBS News/New York Times poll.

"One-third of the money in this bill -- one-third -- was made up of tax cuts," Mr. Obama said Wednesday in acknowledging the divide. "I talked about this at the State of the Union. Tax cuts for 95 percent of working Americans. I just want to say to the American people, because we see some polling where about twice as many people think we've raised taxes as lowered taxes -- 95 percent of you got a tax cut."

And then there were the high-profile missteps like the government's mistaken reporting of stimulus money being spent in zip codes that don't exist. While these mistakes were insignificant considering the scope of the program, they generated headlines and gave Republicans fodder for their claims that the program was wasteful and ineffective.

The White House and Congressional Democrats will be looking to avoid such missteps as they seek to pass a second stimulus -- which the White House prefers to call a jobs bill, since "stimulus" has become a dirty word. But with Congress more polarized than ever, it has been a struggle to get even a modest bill through the House and Senate despite calls from members of both parties for action to spark hiring.

posted by truesee  # 8:51 PM
Comments:
"... multiple highly-regarded, non-partisan economic research firms ..."
Such as? Can you name a few? Can you name two? No? Can you name JUST ONE so we can at least try to check your sources?

"That gulf between perception and reality explains why the White House is still selling the Recovery Act a year after the program was signed into law ..."
Perception: What We, the People see with our own eyes; Reality: What our government wants us to see.

"... while the economy has clearly turned around, with job losses slowing significantly and the overall economy shifting from contraction to expansion ..."
Again, WHERE??? Point to a domestic geographic area or state where this is true!

"And then there were the high-profile missteps like the government's mistaken reporting of stimulus money being spent in zip codes that don't exist ..."
Are you KIDDING ME??? Which qualifies as a "misstep," tens of millions disappearing into a black hole, or the fact that it was "mistakenly reported?"

" ... these mistakes were insignificant considering the scope of the program."
I suppose that would depend entirely upon whether our perspective is from a viewpoint of "perception" or "reality."

Yeah, there's no "spin" on this story (so why do I feel so dizzy?). Thanks, CBS, for another fine example of your patented, unbiased journalism.

While I'll admit most Americans are hopelessly gullible, you can't possibly believe that 94% of us are just plain STUPID! Try reporting the facts as FACTS and maybe, just maybe you'll see your ratings skyrocket a point or two, elevating you to a comfortable and impressive 9th place (behind UPN).