So what exactly is Mitt Romney's job? Even Republicans are unsure

So what exactly is Mitt Romney’s job? Even Republicans are unsure 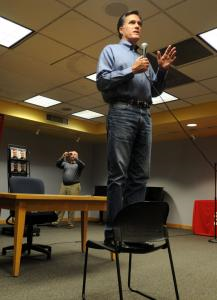 One could spend an entire Sunday morning talk show dissecting the question or even devise a parlor game around it: How, exactly, does one describe Mitt Romney’s occupation?

It’s hard to lump him in with the 9.6 percent of Americans who are unemployed, given that he probably would neither need nor endorse collecting benefits. He has not been appointed ambassador to Mexico, like another former governor, or even Canada. He’s on television often, but does that count as a job? Everyone knows he wants to be president, but it’s a little early to declare that.

It seems the state Republican Party may be having the same trouble sorting out this whole job question. On a campaign finance report posted online last week, a $5,000 donation from Willard Romney (Willard is the former governor’s first name) had no occupation listed. Instead, it was marked “best attempt,’’ as if someone tried to figure it out, but gave up.

“Hmmm,’’ said GOP spokeswoman Tarah Breed, before letting out a chuckle and promising to look into the matter.

By the time Breed e-mailed an explanation Friday, the donation had disappeared from the Office of Campaign and Public Finance website. She blamed a “clerical error,’’ saying the donation should not have been included with the most recent batch because it was not made in late September with the others listed. She said the updated occupations for several GOP donors, also initially missing, were in fact filed, but had not yet made it onto the website.

Jason Tait of the state campaign finance office said campaigns control the posting of campaign information on its website. But they have a 45-day window to send a letter requesting a donor’s occupation, giving the GOP more than enough time to contemplate the matter.

Perhaps the Republican Party can settle on the job title used by Charles D. Baker’s campaign, when it accepted a $500 check from Romney last month: “Politician, Self Employed.’’