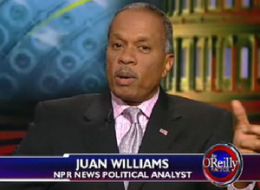 NPR announced late on Wednesday night that it has terminated the contract of longtime analyst Juan Williams over his comments on Fox News that, when he is on a plane with Muslims, "I get nervous."

Williams' comments came during a discussion with Bill O'Reilly on Monday's "O'Reilly Factor." O'Reilly asked Williams if he had been in the wrong during his now-infamous appearance on "The View" last week. (There, O'Reilly's statement that "Muslims killed us on 9/11" caused Joy Behar and Whoopi Goldberg to walk off the set in anger.)

Williams replied that he thought O'Reilly had, in fact, been right. He continued:

"I mean, look, Bill, I'm not a bigot. You know the kind of books I've written about the civil rights movement in this country. But when I get on the plane, I got to tell you, if I see people who are in Muslim garb and I think, you know, they are identifying themselves first and foremost as Muslims, I get worried. I get nervous."

In a statement, NPR said that it had informed Williams of its decision on Wednesday night, and that his remarks were "inconsistent with our editorial standards and practices, and undermined his credibility as a news analyst with NPR."

Williams had been a contributor and analyst at NPR for decades, but his dual role on Fox News -- where he has also been a longtime and frequent contributor -- drew so many complaints from NPR's listeners that it asked Fox News to stop identifying Williams as an "NPR News Political Analyst" in 2009.

posted by truesee  # 7:11 AM
Comments:
i think muslims should be talk show hosts,commentators and run for political offices soon.

# posted by scorpio : 9:34 AM
Hmmm... so it's perfectly fine to bomb the crap out of them, embargo them, shoot them for sport, and contaminate their lands and water with birth-defect causing D.U., .... but you can't say they make you nervous.

# posted by time*treat : 2:16 PM
Yeah, that's right, Americans go around bashing Muslims all day, while Christians are put up on a pedestal, right? Give me a break. Christian-bashing -- or more specifically, Catholic-bashing -- is all the left (i.e., so-called "progressives") in this country ever does. God forbid a fair-minded guy like Juan Williams actually states a FACT that most people are nervous about Muslims dressed up in religious garb getting on their airplane. As if everyone is supposed to forget that practically every terrorist act in this and every other country is carried out by Muslims. Or maybe everyone is supposed to feel bad for all the "moderate" Muslims, who have never bothered to stand up against the terrorists among them. It's all a bunch of political correctness, and regular folks know that it's all crap.

# posted by Todd : 3:06 PM
His freedom of speech has been attacked, I saw that interveiw, ironically npr received 800,000 from George Soros afterthat, hmmmmm we all know he's in favor of socialism in America.
Juan Williams is a fair minded person.