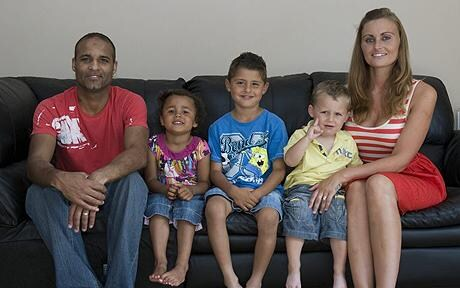 White mum Carla Nurse, 27, and her black husband Cornel, 31, were not surprised when their first child Jermaine was born with a mixed race complexion.

But they were amazed when daughter Tanisha arrived with an Afro-Caribbean appearance -and their second son Jayden was born with white skin and blonde hair.

"Where I live it is a predominantly white town and I admit it looks pretty strange when I walk around with my brood of rainbow children," said Mrs Nurse.

"I am at a complete loss to explain why they are all different colours - I can only think that it is some type of freaky genetic thing.

"After Jayden was born and he looked Aryan my friends nicknamed us the United Nations."

Mrs Nurse , a part-time model from Lowestoft, Suffolk, said her only concern is that many people assume the children have different fathers.

She said: "I remember giving birth to each one of them at the hospital and all the doctors were looking at me thinking I had all these children to different men.

"When people think I've cheated it makes me so angry. "I would never stray from Cornel and never have - I'm totally devoted to him and always will be."

Mr Nurse ,whose Afro-Caribbean father came from Barbados and white mother came from London, grew up in the Suffolk village of Halesworth just 30 miles away.

All three siblings have their mother's nose and big eyes while Tanisha has full lips similar to Mr Nurse.

Mr Nurse said: "They are definitely all mine and the whole thing is just a freak of nature. Tanisha was dark from the start but as the boys got older one has gone darker and one has got whiter.

"All of the kids were planned - Jermaine was conceived on holiday in Florida and Tanisha and Jayden were conceived at home.

"They all have our facial features it's just the colour of their skin which is different - it's hard to believe."

Dr Jess Buxton, of the British Society for Human Genetics, said it was rare for three children with totally different skin colour to be born to the same parents.

She said: "I have never heard of this before and I'm sure it can't happen often. But several different genes control skin colour in a similar way to eye and hair colour.

"This is a random process, so it is certainly possible for the same parents to have children with different skin colours, although because we don't know all of the genes involved it isn't possible to predict when this will happen."