A girl has been nicknamed the 'Jigsaw Kid' after she survived being born with five spleens, a hole in her heart, a diseased and back to front liver, two left lungs and her stomach on the wrong side. 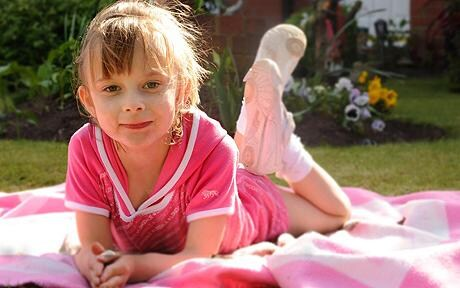 Bethany Jordan:Strangely, when she exercises too much, her heart can be seen beating through her back. Photo: CATERS

Bethany Jordan, six, was born with many of her organs back to front but amazed doctors who had warned her parents, Lisa, 37, and Robert, 44, there was little chance she would survive birth.

Her problems mean that, while she looks a picture of health, she cannot stand up to some of the normal rigours and strains of an average child.

Bethany, of Stourbridge, West Midlands, sufferers from Ivemark Syndrome, an extremely rare genetic disorder, characterised by a poorly-formed cardiovascular system and organs in the wrong place.

Strangely, when she exercises too much, her heart can be seen beating through her back.

There are so few sufferers that very little is known about the condition or what could be its cause.

Her mother Lisa, who is a full-time mum, said: "To look at her she just looks like a normal girl, but underneath her skin everything is back to front and jumbled up.

"When she was born the doctors said her insides were like a jigsaw.

"It has been a bit of a nightmare but she is my star and I love her the way she is - I always will."

Tests showed her brain was normal and Lisa chose to go ahead with the birth, despite the odds being stacked against her.

Dr Patrick McKiernan, who is Bethany's liver consultant at Birmingham Children's Hospital, said: "Essentially her organs are back to front and it's very rare to see something like this.

"She is doing very well despite all of her problems, I think she's a very tough little girl."

Ingrid Gladki, spokesman for the Ivemark Syndrome Association, said: "It's still a mystery as to why it occurs and I think more money needs to be put into research into it."