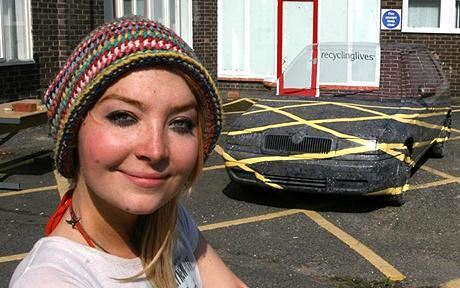 The 22-year-old student at the University of Central Lancashire spray painted a battered Skoda Fabia to match the car park and entrance to her art studio.

Her work, created as part of her drawing and image making course at the university, creates the illusion that the car is see through.

She was given the car from a breakers yard and worked for three weeks to ensure that it blended perfectly with its surroundings.

"I was experimenting with the whole concept of illusion but needed something a bit more physical to make a real impact." said Miss Watson, who is from Ashton under Lyne.

"People have been stopping in the street to look and coming up and almost bumping into it, so it's had the desired effect."

The car is reminiscent of the work by pavement artist Julian Beever, whose attempts to trick people's minds into seeing perspective on the flat surfaces of paving stones.

Steve Jackson, owner of Recycling Lives, the firm that gave Miss Watson the car, said: "When I first saw the photos I was convinced it was something which had been done on the computer, but when you look more closely you see the effort and attention to detail she has put into it. It is just amazing.