Standing just six inches tall and measuring eight inches from nose to tail, Tilly the Chorkie could be the smallest dog in Britain. 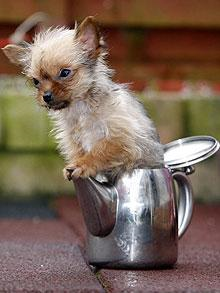 A cross between a Yorkshire Terrier and a Chihuahua, Tilly was born on January 15 at which time she was around three inches long and weighing less than four ounces.

Now fully grown, her owner Karen McPhearson has been told her growing days are over.

"Tilly is so boisterous and enthusiastic for someone so small," says Karen of East Kilbride.

"We took her to the vets last week and we were told that she will not grow any more.

"She has not got any bigger since she was four weeks old and now weighs just one pound four ounces and is just eight inches long and about eight inches tall from head to floor or six inches from her back to the floor."

Measuring less than four inches from the tip of his nose to the end of his tail and weighing around three ounces the pup is considerably smaller than Tilly.

But at only three weeks of age, the tiny puppy has plenty of growing time left.

For Karen however, records are not so important as she and her husband Norrie, 46, now have another addition to their growing collection of dogs.

"Tilly weighs just one pound four ounces but she has a big appetite," says 45-year-old Karen.

"Apart from her usual five meals a day of dog food, she loves to drink tea and eat baby ruskies.

"Norrie and I are always running around after Tilly, her parents Sasha and Tyson (both Chorkies) and our fourth dog, CJ. a Japanese Akita.

"They can be quite a handful but they are definitely worth it."

Despite her tiny frame Tilly does not hold the record for the world's smallest pup.

That record, recognised by the Guinness Book of Records, belongs to Chihuahua Heaven Sent Brandy, a four-year-old Chihuahua from Florida in the USA, who is six inches long.