Man to become First in World to Give Birth to Twins 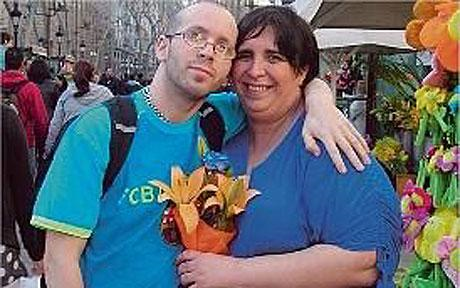 Telegraph- UK-Ruben Noe Coronado, 25, from Spain, postponed the process of becoming a man so that he could keep his female reproductive organs and give birth

'He' fell pregnant after undergoing fertility treatment when doctors told his girlfriend, the mother of two children from a previous relationship, she couldn't have any more children.

Mr Coronado, born a woman called Estefania or Stephanie and still considered female under Spanish law, is due to give birth at the end of September.

He is the first Spanish transsexual to fall pregnant and it is thought he will become the world's first transsexual father of twins if everything goes to plan.

He will bring the twins up with his partner Esperanza Ruiz, 43. They plan to marry before they become parents.

Once he becomes a parent he will resume his sex-change surgery and become a father rather than mother.

He plans to give birth at a hospital in Barcelona after moving to the area from Malaga two months ago with his girlfriend because of family problems.

Mr Coronado, an epileptic who was adopted as a child, said: "It's like being born with three hands.

"You take advantage of them while you have them and you get rid of one of them when they get in the way."

He said he would not sell his story "now or in the future", but admitted he was "thinking of selling the picture everyone's going to want of me looking pregnant.

"If I don't do it, someone else will and they'll make a fortune," he added.

He claimed he had gone public "so people start to see a transsexual pregnancy as normal.

Last June Thomas Beatie, a bearded American, made headlines round the world after giving birth to a daughter, Susan Juliette.

The 35-year-old, born as female Tracy Lagondino, is expecting a second child with his wife Nancy this summer

posted by truesee  # 10:48 AM
Comments:
There is nothing normal about it, and that's square biz. Shim like Octo Mom should have just stayed out of the Media's view. Next it's going to be some teenager pregnant with triplets and thinking society should except it and think it's normal or some perverts stressing how normal it is to be a pedophile. The world is just so selfish and out of order. We have to be in the last days because this is a prime example of lover's amongst ourselves. We best be getting and staying prayed up. Everybody is so worried about what makes them happy to the point I hate to what makes them sad.