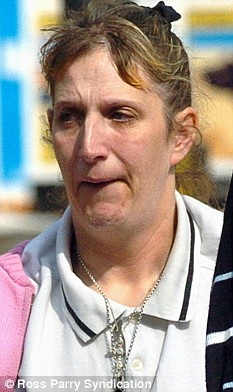 Jailed: Lisa Walker was sent to prison for the second time after failing to ensure her daughter went to school

A single mother has been jailed for the second time for continuously letting her 11-year-old daughter play truant, despite living just 100 yards from school.

Lisa Walker, 41, was given a 60-day sentence by magistrates after admitting her fourth offence in five years of failing to ensure her three children went to school.

Her tearaway daughter Danielle missed 90 per cent of her schooling last summer and more recently, with the threat of prison hanging over her mother, she still only attended lessons 60 per cent of the time.

Walker, a jobless mother-of-three living off benefits, failed to co-operate with attempts by the authorities to help her. Her main explanation for her daughter's truancy was 'some mornings she won't get up'.

She was given a 56-day jail sentence during the summer holidays in 2004 and yesterday Leeds Magistrates' Court heard the experience had done nothing to solve the problem.

Nigel Augustin, prosecuting, said council officials had been working with the single mother and her child to 'encourage' her back to Whingate Primary School in Leeds.

'The defendant failed to take an opportunity offered to her,' he said.

Walker was visited several times last July and August and a child protection conference had been called in which Walker agreed to make an effort to get Danielle to school.

Between June 3 and September 12 last year Danielle failed to attend morning and afternoon registration on 81 of 90 occasions with her mother's knowledge.

That shocking record improved marginally when the decision was made to prosecute, although during this academic year she has still missed a majority of classes. 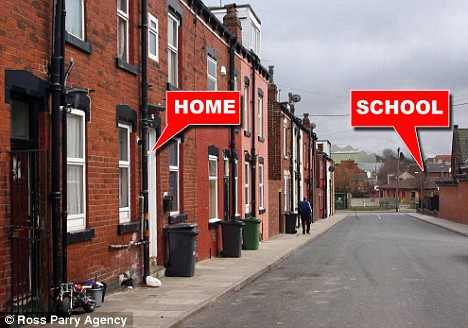 Shocking record: Danielle, 11, attended school just nine times out of 90 over a two month period, despite living just 100 yards away

Passing sentence, bench chairman Phyllis Caffoor said:'We have had to consider that she is an 11-year-old child whose life will be significantly disadvantaged if she does not receive the required education.

'You have not responded to previous orders. You have not co-operated with all the various agencies who, on numerous occasions, have endeavoured to assist you and facilitate Danielle's attendance at school.'

Walker was asked if she understood and replied: 'Yeah, course mate.'

Members of her family wept as she was led away in handcuffs, swearing at reporters in court.

Walker's other children are Dominic, 20, and Jade, 17. They were playing truant, along with six-year-old Danielle, when Walker was first jailed, for her second offence.

The mother was given a further suspended sentence in 2006 over Danielle missing school.

Today neighbours living near the family's rented terraced house in Armley, Leeds, slammed the wild child and offered sympathy to her mother.

One neighbour said: 'The little girl is not very nice and I feel sorry for her mum. She causes trouble with everyone on the street.

'She is mouthy and she throws sticks at people's houses and runs away.'

Another, who also asked not to be named for fear of reprisals, said: 'I've seen her take the girl to school some mornings but there are some days you don't see them at all.

'It's like she just gave up trying because there was nothing she could do.

'I don't see her causing trouble when she's supposed to be in school because we are so close to the school here that she would probably get spotted.

'But she is allowed to roam about at night doing what she wants. She doesn't seem to care about anything or anyone.

'She doesn't have a male figure in her life and I think the mum has given up trying to give her some discipline.'

Ros Vahey, deputy chief executive of Education Leeds, said: 'Parents and carers have a legal responsibility to ensure their children go to school.

'Attendance is something we take very seriously and legal action is very much a last resort, but in exceptional cases we have to use the full force of the law.

'We will now continue in our efforts to bring this child back into full-time education so she can get the most out of her time at school.'

# posted by emilyg : 2:02 PM
I don't get it either Emily. I guess mental problem has been ruled out.

# posted by Tenaj : 2:18 PM
The mom has no job and receives gov't funds. So why doesn't she escort her little ray of sunshine to each and every class every day? It's not like she has to be at work on time. And if that doesn't work do what a mom from the hood would do......BEAT THAT A**!!!! My little darlings know that if I have to pay a fine or do jail time because of them skipping school, they can give their heart to God but their a** belong to me. And I intend to beat until I get tired, rest, and beat some more. Why, because I don't ask for much and the little I ask for I expect to get. Plus I have worked my butt off to get where I am career wise and I will not have it threatened because I have to do jail time. That's messing with my money. #1 Rule, DON'T MESS WIT MOMMY'S MONEY!!!!

# posted by PERDUE : 3:31 PM
"At my house where I'm the capt if you don't won't to row by the rules of my ship well you'll just have to take a dip." I too had very traunt children in my life but I got rid of them once I couldn't tolerate it anymore. They were adopted. But you see here's my problem everyone who thinks that they are anyone wants to have say on how your rear your children. I had the courts telling them that their curfew was at 10p.m., whereas at my house it was 8p.m. often with raising incorrigible children you can't win for loosing. I dropped one off in the front she would just leave out the back. Often both stayed kicked out, I worked part-time 4hrs a day and it would take everybit of those hours to get them both back in school because school wasn't cool and everybody else was fools who even began to beg the differ. People are quick to judge the parent but in actuality you three types of children. The ones who won't do, the ones inbetween, and the ones who do too much.
As for this mother my heart goes out to her and just maybe she should have been dropped them off at a safe place.