Teenager tells police catch me if you can

Colton Harris-Moore: “Catch Me If You Can” Teen Eludes Detectives 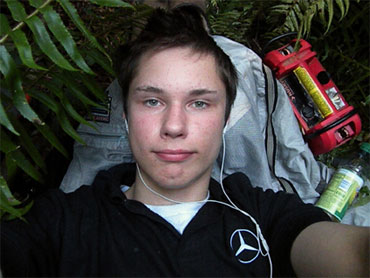 EASTSOUND, Wash. (CBS/AP) It is a scene straight out of the movie "Catch Me If You Can."

In the darkness of this sleepy island town, the beam of a deputy's flashlight caught the back of a lanky teenager wanted in a notorious 18-month burglary spree.

The teen glanced over his shoulder, and then vanished into the woods. "He virtually vaporized in front of me," deputy Jeff Patterson recalled.

Such encounters have become all too common on the bucolic islands north of Seattle as police hunt for an elusive thief whose crime spree is quickly becoming a local legend. Colton Harris-Moore is suspected in about 50 burglary cases since he slipped away from a halfway house in April 2008.

Now, authorities say, he may have moved on to a more dangerous hobby: stealing airplanes.

The saga continues, as Harris-Moore keeps finding new ways to embarrass police by slipping through their grasp.

The 18-year-old typically breaks into businesses or unoccupied vacation homes, lies down on the couch and then dashes into the woods if confronted. He earned himself the nickname of "the barefoot burglar" by committing some of his crimes without wearing shoes.

But authorities say the case has taken on a dangerous new dimension now that Harris-Moore is apparently joyriding in small aircraft. 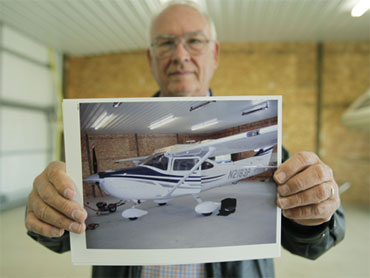 (AP PHOTO)Photo: Pat Gardiner, Oct. 5, 2009, in his empty airplane hanger in Bonners Ferry, Idaho. Gardiner's Cesna T182T, shown in the photo he is holding, was stolen by Colton Harris-Moore.

He is suspected of taking three planes from rural airports and crash-landing them. There were bare footprints inside and outside some hangars that had been broken into. In one, police said, footprints were on the wall, indicating that the suspect put his feet up, apparently while eating.

His mother said she doesn't see anything wrong with what he's suspected of doing.

"I hope to hell he stole those airplanes, I would be so proud," Pam Kohler told a reporter, noting her son's lack of training. "But put in there that I want him to wear a parachute next time."

Over the weekend, someone took blankets, shoes and food from a home near the site where a stolen Cessna crash-landed north of Seattle on an apparent path toward Harris-Moore's hometown on Camano Island. SWAT teams were called out after a shot was fired from the woods, but whoever was responsible got away.

The teen may be motivated by a strong interest in aviation, but police say he does not discriminate in his choice of stolen vehicle: A boat stolen from the island was found last month on the mainland.

Police believe Harris-Moore also recently took thousands of dollars from safes and ATMs at businesses in the Orcas Island hamlet of Eastsound.

The teen has exploited the fact that the police do not have the manpower to mount an all-out hunt in a property crime case. Sheriff's offices on some of the islands do not even have tracking dogs.

Frustrated residents wonder how hard it is to find a 6-foot-5, 200-pound teenager in the confines of an island, while red-faced cops bristle at what they see as attempts to romanticize the fugitive.

A Harris-Moore fan club has emerged on Facebook, and a Seattle man started selling T-shirts bearing his picture and the words "Momma Tried."

Island County Sheriff Mark Brown, whose office has dealt with Harris-Moore at least since he was 11, said he recently blew up at a "Today" show producer who wanted to ask him about the made-for-Hollywood aspect of the story.

"He is an adult felon!" Brown said. "I will not have him made into some kind of folk hero." 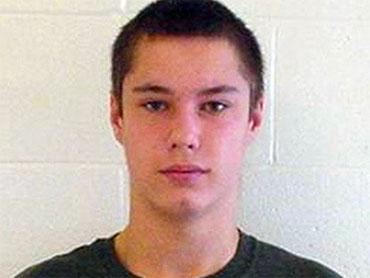 Harris-Moore grew up in the woods of Camano, a piece of land shaped like a backwards question mark in Puget Sound, 30 miles north of Seattle. A long gravel drive lined with thick vegetation and "no trespassing" signs leads to the property. His home is a tarp-covered, single-wide trailer surrounded by tall cedar trees and decommissioned pickup trucks.

The teenager's mother recently greeted a reporter and photographer by promising to chase them off the property with a shotgun. Then she granted a lengthy interview.

Listen To Audio Interview With Mother of Colton Harris-Moore

She said her son's father left when he was about 2, his stepfather died when he was about 7, and from the time Harris-Moore was in first grade, she knew there was something off about him — "sort of a disconnection."

He wouldn't listen to his teachers, started altercations at school and sometimes deliberately broke things around the house, Kohler said. And sheriff's deputies sometimes accused him of stealing things even when he hadn't, she added, such as a $300 bicycle she said she bought him for his birthday one year.

"Every time he had anything any good, everyone thought he stole it," she said. "What does that do to a kid?"

Harris-Moore had his first conviction, for possession of stolen property, by age 12. Within a few months of turning 13, he had three more. Each brought a 10-day stint in detention or community service.

An Island County sheriff's deputy on Camano once caught him by posing as a pizza delivery guy after noticing a multitude of empty pizza boxes at a campsite he used. Another time, deputies saw him jump out of a stolen Mercedes. They later found his self-portrait on a stolen digital camera, posing in a black, collared shirt with a Mercedes logo.

In 2007, he was sentenced to nearly four years in juvenile detention after being caught in an unoccupied home when a neighbor noticed the lights on. But he did well enough at the detention center that he was transferred to a halfway house, where he sneaked out an open window.

He's been playing cat-and-mouse with authorities ever since. His mother said she has reason to believe he linked up with a small group of other people who have safe-houses protected by high-tech surveillance systems, but she said she doesn't know anything else about them.

"We haven't caught him, but neither has anybody else," said San Juan County Sheriff's Sgt. Steve Vierthaler. "You always get caught eventually."

Kohler hopes her son makes his way to a country that won't extradite him. She said she sometimes talks to him on the phone, but she won't let on if she knows where he is.

"I figure I'll spend my time with him in a positive way," she said, "because who knows if he'll be shot tomorrow?"