Health care reform has turned into the costliest single legislative issue yet. More than $600 million has been spent on lobbying, campaign contributions and TV ads.

WASHINGTON (CNNMoney.com) -- The price tag to influence the health care debate in the halls of Congress has surpassed $600 million and is fast becoming a legislative record breaker.

Reaching beyond the half-billion mark, the total spent on lobbyists, television ads and political donations is enough to pay the insurance tab for about 45,000 families a year.

A third of that spending, $200 million, was raised and spent just in the past few months, as Congress has been more thoroughly ensconced in policy debates about public insurance options and taxpayer-funded abortions.

Senate Democrats are expected to unveil their official health care bill as soon as Wednesday, and debate it in December and vote by the year's end.

The big spenders range from drug companies, hospitals and doctor groups to organizations that advocate for unions, immigrants and retirees.

Lobbying: Lobbying continues to account for the largest chunk, with health care industry spending just shy of $400 million through Oct. 26, according to the Center for Responsive Politics.

"The health sector is on pace to spend more money than it ever has before," Dave Levinthal of the Center for Responsive Politics, which analyzes and collects lobbying and campaign spending figures. "Its spending obliterates its totals from previous years."

Health industry executives say that their spending is necessary, given what's at stake. It's also guaranteed by the Constitution.

"We're reforming one-sixth of the economy with an issue that effects every individual and employer across the country," said Robert Zirkelbach, spokesman for America's Health Insurance Plans, a group fighting against a public insurance option. "Sometimes that point gets missed in this debate."

Lobbying by drug companies accounted for nearly half of all health sector lobbying. Among other issues, the pharmaceutical industry is keen on making sure that the government doesn't start allowing imports of cheaper prescriptions from Canada or Mexico.

"We are doing everything possible to make comprehensive health care reform a reality this year," said Ken Johnson, senior vice president of the trade group PhRMA. "It will benefit patients, the economy and the future of our nation. There's a lot at stake right now."

The lobbying figure doesn't include lobbying by the Chamber of Commerce ($65 million) or AARP ($15 million), groups that have lobbied on health care, as well as other bills, including financial regulatory reform.

Other heavy hitters among health sector lobbying include hospitals and nursing homes ($77 million) and doctors and other health professionals ($59 million).

Television advertising: Spending on TV ads by health care interests is the next major record-breaking category - topping $165.7 million through Monday, according to the Campaign Media Analysis Group.

"This is far and away the most we've seen spent," said said Evan Tracey, president of the the media research group, which also consults for CNN. "There's certainly no comparison that comes right to mind."

Over the past month, opponents have spent $23 million in ads opposing health care reform while supporters have spent $11 million.

TV ads had been more focused on policy issues, such as calls for insurance coverage for tests that detect autism. But now ads are starting to transition into focusing on politics, with attacks on lawmakers who vote for or against health care reform. That means even more will be spent in coming months, as ads begin running in media markets with competitive congressional races, Tracey said.

Campaign contributions: Political donations are also on the rise.

Health care professionals and companies have plunked down $38 million to fund 2010 candidates for federal office, according to the Center for Responsive Politics. Some $95 million was raised during the 2008 cycle. 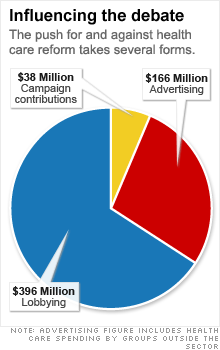 # posted by pumpi76 : 12:41 PM
There ought to be a terrorrist group for those that waste money...I am very serious...
you know those 42 billion dollalrs a year could had gone to the poorest state of the USA, maybe Alabama or West Virginia or some other state...Isn't the entire USA gets: 29 billion a year from all the lotteries across the nation...Now imagine 1 single state getting 42 billion a year forever...PLEASE DONT EVER GIVE ME THAT CRAP THAT THE USA IS NOT THE RICHEST COUNTRY IN THE WORLD...

# posted by pumpi76 : 4:19 PM
tHIS retards act like we are not at WAR...It acts like the USA doesn't have 52 states, WHAT ABOUT AMERICAN SAMOA DO YOU GIVE A   ABOUT THEM..DUDE IF YOU WANT TO DUMP THOSE 42 BILLION A YEAR give it to Puerto Rico...Create a all states lottery...Where 1 state will go home with 42 billion dollars a year...Each state lotto which is probably the one thing generating a lot for that states each state lottery generates like 600 million a year, in other states it generates: 1 billion a year...Now imagine 42 billion dollars a year...Dude PAKISTAN is only getting like 2 billion a year to fight terrorrism...With 42 billion dolllars a year you can create a "small army" to preside over Irak...what the....Dude the Central Intelligence Agency, the FBI, what about more cops in a particular state, with 42 billion a year in 1 state it could go to the entire police department...