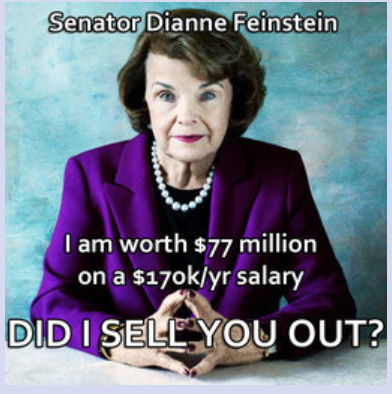 posted by konane  # 2:00 PM
Comments:
That reminds me of a guy my pop worked with several decades ago; he worked for the company (Philips) to which my dad's company sold all their oil and gas production. He decided to quit his job and run for sheriff of the neighboring county and dad asked him why he was going to quit a $40k/yr. job to take one that paid $27k and the man told my pop:

He won the election, but lasted just a single term. He skimmed a little too much to suit his constituents.

# posted by mikeintexas : 2:13 PM
Thanks Mike. Interesting story. I wonder who was making the puppet's mouth move with the "blockbuster revelation" about Judge Kavanaugh.

# posted by konane : 2:24 PM
Wonder how much her Chinese spy/car driver was paying HER!

I don't know how Feinstein increased her wealth so dramatically, but I remember Pelosi and the accusations of insider trading.   I don't recall the details, but it involved some business she had in an American territory and the wages she paid to her employees there; she was responsible for a bill to exempt them from minimum wage laws. I might be getting her mixed up with someone else, but I don't have the time nor inclination to go research it. (I'd rather spend that hour or two reading about ANYONE or anything but her, y'know?) She's one of the richest members of Congress and I wonder where Feinstein ranks.

# posted by mikeintexas : 2:49 PM
Meant for that about Pelosi to say "...don't recall the details, but another charge was leveled at her...(in regards to the min. wage scandal)"

It's beginning to be where you can't keep the crooks in Congress straight w/out a scorecard.


"Don't steal. The government hates competition."
~Ron Paul had on his desk while he was in Congress:

# posted by eddessaknight : 3:04 PM
Thanks Mike. I believe Feinstein's husband's companies have been the recipient of some very lucrative government contracts.

I wonder how many have "foundations" which can be "donated" to?

While I sometimes think the two major parties are very similar in many ways, at least the Republicans get rid of their crooks- the Democrats re-elect theirs.

# posted by mikeintexas : 3:30 PM
Thanks Sully. I was wondering same also.

# posted by jarasan : 10:41 PM
Thanks Jarasan. No government contracts to any companies owned by spouses during their term in office and for a period of 10 years after they leave.